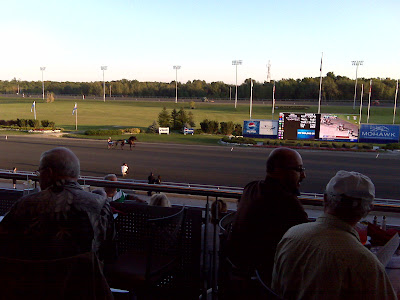 Muscle Hill (pictured warming up) made his first trip to Canada this weekend, and he did not disappoint, winning by six in 153.3.

My first trip to see the horse did not start off well for my pshyche. I watched him warm up, and when he goes slow he does not at all look like a picture of perfection. He tends to hike a little bit. When he does get going he smooths out. However, if I told you that I said "I have an inkling to bet against this horse", it would be true.

During the post parade he looked good and all business. Brian Sears scored him out fairly well in front of the stand, which I did find a little bit odd, but since he had the nine post it did make sense. When the gate opened, he floated out, and grabbed the lead after getting mildly stung, and worked through a nice middle half. About 300 feet or so down the lane driver Brian Sears let out a small chirp and he opened up on the field with ridiculous ease. When he did, the people around me let go a little bit of a gasp. At Mohawk upstairs in the summer you will find some of the most knowledgeable fans anywhere - kind of like going to a Leaf game at Maple Leaf Gardens; everyone knows hockey there. These fans knew what they were watching.

In the second split, Explosive Matter must have came up sick, because he had no fire whatsoever. The winner, Southern Roketop looked fabulous I thought. I don't think he can give Muscle a run unless something wonky happens, but he should be heavy chalk to round out the ex.

Later on in the evening the second star to show up at Mohawk was NA Cup champ, Well Said. I was somewhat ambivalent about his presence for the evening. After his last qualifier I was looking to play against him from a betting standpoint, but since the field came up a bit light I was there solely as a fan. I popped into the paddock to have a look and he was really nice. Healthy, seemingly happy and ready to go. True class. The race itself certainly did not go well for him. He was all out to go by Carnivore, Jack Darling's colt. The crowd in the grandstand where I was standing was taken somewhat aback when Ron Pierce in the interview said the race 'was a good easy one for him'. I don't think he will go to the Jug.

All in all it was a super-pleasant evening. Mohawk (as you can see from the non-professional blackberry photo above) is a wonderful place in the summer and fall. The crowd was out, and we got to watch some very nice horses do what they do best.
at September 14, 2009
Email ThisBlogThis!Share to TwitterShare to FacebookShare to Pinterest

Gotta think the Well Said camp was not pleased with Pierce's comments about Well Said and the Jug, saying he would have no problem with the turns and the two heats. Especially since Toni Rose started hedging about going to the Jug a few days earlier. It puts them in an awkward situation.

I am sure Pierce heard of Toni's comments; my guess is he was campaigning for a drive in the Jug. Just the same, I expect someone to have a chat with Ronnie.

Mohawk is by far the best racetrack in Canada. It's great to sit at a picnic table by the wire, eating a freshly BBQed cheeseburger on a nice summer evening and watch the races, right on top of thr action. True fans drive to the Hawk for the action. The annoying loudmouth degenerate gamblers bet at Woodbine or from home, which only helps the atmosphere at the 'Hawk.

This is on the schedule for Thursday at the Delaware County Fair. Do you really think they would do this if Well Said wasn't going to race? And why would they skip the jug? Maybe you have forgotten, but horses don't generally skip this race. Maybe it is fasionable to talk about it since somebeachsomewhere ducked it last year. Toni Rose is the one who should stop talking BS... they are going to the jug.

9 a.m. Driver Ron Pierce and trainer Steve Elliott will discuss their top pacing colt, Well Said, as well as their experiences with other great horses.

Rockin' Ronnie is the best interview. Always says exactly what he is thinking. And he is a nice man who gave stopped to give his whip to my 8 year old son last Saturday night and asked him if he how school was and if he was going to get good grades this year. He impressed me.

Skipping the jug wasn't made fashionable by Somebeachsomewhere, it was made "Sensible".
Here, Here, to good owners putting the well being of their horse above their own personal egos.