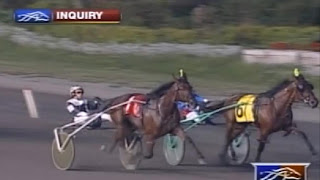 Well for the first time in harness racing at the big track since the new whip rules, a horse was pitched. And it was in a stakes race.

In race two this evening, in an elimination for the Peaceful Way stakes, driver Trevor Ritchie put both lines in one hand, and tapped his mount (the very nice filly Angostura) with the whip. She went on to win the race by a little more than a whisker.

The inquiry sign flashed. And after several long minutes it was announced that she would be placed last, as per the ORC rule, for "having both lines in one hand, and striking with the whip".

The 2-5 favorite, Costa Rica, was placed first.
at September 14, 2009
Email ThisBlogThis!Share to TwitterShare to FacebookShare to Pinterest

I bet the drivers are licking their chops waiting for exchange betting.

Bet against and if there is any chance of possibly winning, put both lines in one hand, tap the horse and be placed last.

I will never bet $1 on a track (soon to be a sport) where a horse can be placed for a whipping violation on the judges discretion.

I just hate that I'm so deep in the sport that I can't get out without a lot of pain.

Hurray for the judges. Of course, now here comes the appeal and then the court case. Hopefully the ORC holds strong because if they don't, all that was intended by this rule will go out the window.

Do you understand there are people betting on these races?

I bet the horse and I lost. I knew I was and it was no big deal to me at all. It is just like any other interference rule and I know exactly what to expect.

If you bet $200 to place on Trevor's horse, the whipping rule cost you your bet because he was never going to be worse than 2nd.

If you bet $200 to place on Trevor's horse and he bothered Costa Rica down the lane, even though Costa Rica finished 2nd, would you be happy if they placed Trevor last for interference to only Costa Rica?

It's the biggest joke of a rule ever.

The way the rule is written....if a horse is 20 lengths in front while winning a million $ race, if the driver takes his hand out of the handhold and waves his whip in victory 3 feet before wire, by the rule, he is supposed to be DQ'ed and placed last.

ITP, yes I do know people are betting on these races. But as Rick mentioned, horses get disqualified for minimal interference as well as pylons; these are the rules.

Hopefully the message by last night's DQ will resonate and others will be less tempted to violate the rule.

It is like any DQ rule to myself, only easier. You can not take both reins in one hand because if you do you are placed last and that driver did that..... as plain as day. It was the easiest loss of $80 I ever had. I turned to race three right after Trevor's horse crossed the line. There are a good many rules in racing that are subjective where I get steamed because of judges interpretation, but this one is def not one of them.

Harness racing is not thoroughbred racing. With the runners, if an infraction occurs the question is if it impacts the finish. In harness racing, if a rule is violated you are disqualified no matter what. I once lost a trifecta because Clint Galbaith passed a tiring horse and came back to the rail a little to quick. Even though he won by 20 lengths, they still disqualified him.

Also if exchange betting ever comes into being the drivers wouldn't need the whipping rule. They could just go inside the pylons and accomplish the same if you think they would consider doing such a thing.

Doesn't Trevor Ritchie get any of the blame? After all, the easiest part of the rule to comply with is not to drive with the lines in one hand. If he complied with a rule after educational sessions (three different sessions at Mohawk) were held with the drivers and roughly two weeks of warnings there would never have been a disqualification in the first place.

I read the harnessdriver board and the topic about this there. It proves we should never, ever, ever have horsepeople involved in marketing or sport decisions.

The last horse I saw go inside the pylons for 1/8 of a mile while improving position from 4th to 1st, the ORC judges left up as the winner.

I just watched the replay of that race and the whipping was so minimal it is an absolute disgrace that this horse should be placed last. Take a look at the race won by "The Mame event" on the same card. The driver of that horse is talented enough to figure out how to beat the tar out of his horse while still holding a line in each hand, therefor, no penalty. Harness racing is becoming a bigger and bigger joke by the second. What a sad, unfunny joke.

It is not a question of severity, the rule is the rule, just follow it. All the complainers are letting the offender off the hook, the rule was cut and dry, just follow it, why should their be any more to it than that.
This issue reminds me of those who complain about photo radar speeding tickets, all those complainers always ignore the most essential of factors, that they were in fact speeding.
Since 50 years of telling drivers to not ABUSE the whip hasn't worked, the industry had only one choice, take away the whip, which is where we will finally end up.

Then there should be a suspension levied to the driver of "The Mame Event" who was clearly beating the living #$@% out of the horse in the last 1/8th of a mile. I agree the rule was properly administered to Mr. Ritchie, but the sad part is, he was not striking or beating on the horse. The driver of "The Mame event" clearly was. I think what most people are tring to say is that it is a STUPID rule insofar as the owners and bettors should not be penalized. It's ludicrous really.