Muscle Hill Draws Post Nine; Online Wagering in BC; and it is Trouble for Racing 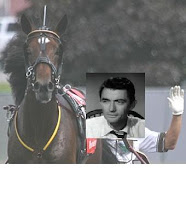 Muscle Hill drew post nine in his Trotting Classic elimination at Mohawk. The elim highlights a very good card with many stars out for their respective Simcoe and Nassagawaya Stakes. The card has 13 races, and with the Meadowlands closed, you don't see a better collection of harness races anywhere.

Trainer Greg Peck in his Trot Radio interview today spoke about Brian Sears leaving last week to drive in Canada, how it came that Peck himself was first going to drive the horse, the fact he will be sent to stud this year and more here.

The fact that he is going to stud is not a surprise - they all do nowadays. But I do wonder if we even try. For example, the purse for the Canadian Pacing Derby used to be $850,000; it is now about 200k less. Meanwhile the purse for the Jug is going up, the Metro for 2YO's, the NA Cup and Meadowlands Pace are all stout. Seasoned race watchers in the thoroughbred game have really given a kick in the ass to that sport for their poor scheduling of events, and the lack of meaning in grade one races. Often times you can watch twenty stakes in one weekend. In our sport this is equally frustrating. Almost every week there is a huge signature event for a track and it is watered down as much as the entire sport is. With some foresight and scheduling, along with the massive amounts of slot money out there, there is no reason we should not get together and try to have three one million dollar races for aged horses - one at Chester, one at Mohawk and one at Yonkers. If we add the Haughton and the Breeders Crown there might be more than enough cash for the aged horses to stick around for awhile.

The BC Lotto is going to run online casino games. Want to play poker, blackjack and more? No longer will you have to go to one of the overseas sites.

B.C.'s plan to introduce the new games online is unprecedented in North America, according to one gambling expert, who noted the U.S. government has outlawed casino-style gambling on the internet.

"It's not new, but in terms of being legal and authorized by a government in North America it will be brand new," Bill Thompson, a professor of public administration at the University of Nevada, told CBC News.

This is another nail in the coffin for horse wagering. This will proliferate over the web and will take more and more customers. We, like in the US, have technically a monopoly on onshore legal wagering. We have not done a heck of a lot with it. Too much infighting and too much to get done. I wonder what would have happened in 2000 if when Betfair came to us, we built a plan for Canada together. We help them get licensed, we offer all our tracks to Canadians, and we share in the revenues if and when sports wagering online was passed. Would not have we and racing in general been in better shape to compete with the BC lottery, when this inevitably happens?

The second edition of the Harness Edge online edition is up and running here.

A look at the University of Louisville study at HANA where it showed that to raise handle and interest in the sport, takeout is the #1 issue. Purses come in at 0.06 elasticity - which means if purses were doubled we would only see a 6% increase in handle. Why do we constantly hear that if we increase purses all will be good with handles then? The opinion piece explores that.
at September 09, 2009
Email ThisBlogThis!Share to TwitterShare to FacebookShare to Pinterest

On Labor Day, I went out to Freehold for the Cane Pace, the "first jewel of the pacing Triple Crown". I think this race shows how misused the resources are in developing harness racing. There are tremendous resources being put into purse money, but nothing done to relieve the ultimate customer -- the bettor. In the Cane Pace, the purse was $325,000. I didn't see the total handle for the race, but the win pool had a little over $13,000 in it. What does that mean -- at most $60,000 or so bet on the race? $10-$12,000 takeout for the house?

Instead of throwing money at the horsemen, for merely 3-4% of the purse money the entire takeout could have been eliminated. What was the handle for the whole day? I'm sure it was embarrassingly small. Why not use a portion of the purse money for bettor's relief?

This year the Cane Pace field was weak and did not attract the top three year olds. Notwithstanding the fact that the entire "triple crown" concept is a complete failure for harness racing, the stakes races should be reassessed and put into some coherent sequence that would a.) ensure that the best horses compete with each other in the best races, and b.) enable storylines to develop that might draw in the casual horseplayer.

What if the Cane Pace used a portion of the purse money to eliminate the takeout for that race. Is it not possible that using 3-4% of the purse money for this purpose would stimulate betting interest for the race, and thus for the stature of the race? Let's say that the purse were $300,000 -- would that have impacted the quality of the race?

Right now, I really can't see what the Cane Pace (and other stakes races) bring to the table in terms of building betting interest in harness racing. Ultimately, the slots subsidy will go (which will result in horseless states which will presumably discontinue sire stakes as well), and harness racing will have to stand on its own four legs. The only way to do this is to build the handle.

While racing had a monopoly for years and accumulated bad habits during that time, the good news is that there are so many more betting dollars out there than there were when Stanley Dancer was appearing on Ed Sullivan. Racing doesn't need to be the only game in town, but merely needs to have a respectable market share of the much larger present-day gambling market. The product that harness racing sells is wagering tickets -- not races, not horses, not horsemen. Improving the quality of that product vis-a-vis its competitors -- e.g., hold'em, lottery tickets, slot machines, etc. is the sine qua non, and is necessary for the survival of this pastime.