A Look Back at the Los Al Takeout Increase

In the spring of 2010, Los Alamitos decided to try and increase revenues for purses by raising the takeout. Their horse population was not stout and they didn't much want to drop a day a week to get purses and field size up (the easiest way to increase a purse, or handle 'per race' is drop a day, but it doesn't grow the pie, generally). This was a last ditch attempt to get that done.

It was passed as a "temporary measure", where if handle or revenue looked to be hurting, they would review the policy and revert back to the old takeout rate that fall. It was also a test case for raising takeout at all thoroughbred tracks in the State.

As the following graph, prepared by USC economist Caroline Betts, showed back in 2010, it was probable the takeout increase was having an affect: 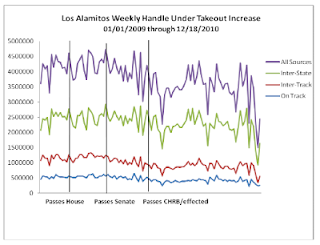 It appeared the initial news about the takeout increase filtered the horseplayer information channels like Paceadvantage.com, HANA and elsewhere. There was a decrease rather quickly. However, the data is noisy, especially when we factor in they ended up dropping a day a week anyway. Instead of racing 4 days a week they were racing three.

This noise was relayed to the CHRB during the review. The "average handle per race" angle was talked about. As well, the initial decrease was blamed on other things (yes, I know this sounds silly) like the Vancouver Olympics. Horseplayers argued at the meeting that the plan looked like it was doing more harm than good. In the end they voted to keep the price hike, and continued to decrease payouts to customers who cashed tickets. Later in 2010, they voted to expand this policy to the thoroughbred tracks in the state.

I've always believed a takeout increase is not felt immediately. Sure there's the negative buzz and bad PR, and that does decrease some handle, but horseplayers are creatures of habit. Some will happily keep playing.  I believe here is where the effect is felt: Over time they have less money back to bet, this causes them to have more betting low's than high's, and it is deleterious.

It's not unlike the opposite of a slot machine. Casino's know that they have to give back a lot of money, because sitting at a machine that eats all your money in ten minutes is not much fun. They give back enough to keep the users brain happy, thinking they are winning when they aren't. In horse racing, dripping bankrolls act the same, and if the faucet drips more, the player has less money and less fun. Some end up leaving the game forever.

I went through some handle charts yesterday to see if any of this took place. Although it is hard to say for sure, I think there is ample evidence that says it has.

Fast forwarding to today almost three years later, I looked at a few snapshots (this is not scientific, just a few race days). For three days at the median in January, the results are:

This is well down from 2009/2010, for both the pre and post takeout hike periods. Horse racing mostly uses the economy when handle goes south, but that is problematic here. The economy is still bad yes, but it's better than 2010, and with the rate of inflation alone, handle should be up, not down.

The other interesting thing I noticed is average on track handle. On track handle pays full boat, and over time this should fall with a rake increase. At Los Al this may have happened.

I am the first to admit that these numbers are not the be all and end all via the takeout increase. They are also only a small snapshot. There are many things that go into handle increases, and growing or reducing the pie. There have been many changes in racing since 2010, of course, including rebating (which lowers takeout and grows handle. Perhaps ironic they made that change in California, where they raised rakes to grow).

We can argue numbers until we're blue in the face - maybe these aren't "CHRIMS" numbers, or maybe there was bad weather in January, or maybe the return of the NHL played a part. But down to its simplest terms: Los Al raised rakes in 2010 to grow the horse population, stay racing four days a week, and as a corollary, hike handle with better field size and a better product. That was their mission with the takeout hike and it's why it passed the CHRB.

Three years later, that has failed to occur.

They are racing three days a week, not four, and handle per week has fallen by a good amount. On track handle, which the track and purses get the most money from, is down precipitously. I believe this should act as a cautionary message to any track or horsemen group who believes they can raise prices on their customer base and prosper.


at February 21, 2013
Email ThisBlogThis!Share to TwitterShare to FacebookShare to Pinterest