Racing Is Made For In-Running Betting 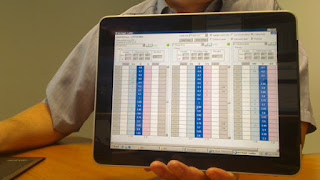 Yesterday's Super Bowl was more than just betting the Niners -3.5 (like I did, ugh) if you went to the exchange, simply because the betting is not over when the game starts; it's just beginning.

After the lights went out with the Ravens leading 28-6, you could lay them (bet them to lose) at 1.15. 8 minutes later, when the Niners got their act together and recovered a fumble that allowed them a chance to go ahead, they were dogs, trading at 2.40.

Several years ago I was presenting at the Canadian Wagering Conference in Montreal, Quebec. Along with industry folks, there were a few bettors like me, including a couple of professional punters, who were sharing their opinion on harness racing, trying to offer some suggestions to make the sport a better betting game.

At the end of the first day, one of the organizers asked me, a couple of other bettors and a track handicapper if we wanted to make the drive to Three Rivers Raceway, about 90 minutes up the highway for some food and some harness racing. We bit and off we went.

After enjoying some excellent fare in the dining room and playing the first six or seven races at the small pool track, one of the pro bettors asked if we all wanted to play a game. The challenge was to pick the winner of the race while the race was going on. You could pick any horse, at any time, and get even money for a $5 bet, but once a horse was picked, no other person could choose that horse.  What happened was a lesson about what can occur when racing moves outside the pari-mutuel system, and broaden its reach.

As the gate sprung for the 8th race, the four people playing were silent, not wanting to choose a horse at even money too soon. Past the quarter, with the three horse, who was the favorite, comfortably on the front end, someone yelled “I’ll take him”. Soon after, the second choice was nicely tucked second over and the driver looked to have a lapful. Someone took him. Then at the top of the stretch, the pocket horse looked good, was getting out and another of the players yelled his name. He went on to win, and the player who did not speak up until there was about 200 yards to go in the race, doubled his $5 (of course the pro was the one who made money, it was his game).

After the race was concluded there was the usual trash talk about how the winner got lucky, or how the driver on the second over horse tipped too late. The common thread was that everyone had a great time playing this impromptu game, and we couldn’t wait until the next race.  It ended up being the highlight of the evening.

British betting giant Betfair saw this opportunity early in the 2000’s for thoroughbred racing, and jumped on it. Millions of dollars are now bet on UK races when the races are being run. Not long ago Black Caviar, the Australian supermare, had $40 million traded on her, much of it in running, where she rose to almost even money near the finish. Trading was still going on after the wire, because punters were not 100% which way the photo was going to go. If you have seen a three mile steeplechase, you are immediately aware of how exciting this form of betting can be for that type of race.

What about harness racing?

Unlike a 5 furlong sprint in thoroughbred racing, where literally half the (likely short) field has no shot at the quarter pole, harness has some definite advantages. If you can judge pace you may be able to get some bomb odds on a closer. If you can judge how a horse is traveling – if he’s on the bit, pacing well, etc – you have an edge. In many harness races at Balmoral, or Mohawk , or the Meadowlands, horses can win from the lead, the pocket, third on the rail, or first, second or third over as a matter of course.  It’s not uncommon to see several horses across the wire. A lot of our races are very exciting, with tons of possible winners.

The sticking point of course, is that racing is married to the pari-mutuel system. It’s how things have been run, it’s how they are run, and systemically it has not really changed one iota since it was invented in 1908.

At that same conference in Montreal, one of the topics was about new types of wagers and harness racing’s future as a gambling game. After that panel, a gentleman who was running a couple of small tracks approached me and we started chatting.

I offered the opinion that his venue – where tiny pools were the norm, and few serious players would ever give him a look – could theoretically take off if new systems were employed.  I surmised if I could wave a magic wand, a new tote board with an exchange instead of a win pool (where the odds are meaningless anyway because they can change with a $10 win bet) would be displayed.

This “market” would have market makers, at zero takeout, supplying liquidity so there will always be an available bet if customers want one. Customers could lock in their price, hold it, trade it out or cash in while the race is going. When the race was running, the odds would change on the tote board, just like it would on computer screens around the nation, or the world. It’d be buzzworthy, especially if his was the only track doing it.

This was in 2008, when 90% of his purses and operating profit came from slots, so low takeout that’s needed in a system like this, new mechanisms, giving resellers a larger slice for technology,  and the rest of the issues (that cost money to implement) were less important. Of course, with slots money being removed in Ontario, this type of ideal becomes harder and harder to achieve, even if it was made 100% legal.

However, the same point remains in 2013. In-running betting, fixed odds, tradable positions on horses are made for racing. It’ll likely never happen, but in this world if you are not innovating, you’re likely dying. Racing – especially harness racing - is in dire need of some wagering innovation.

at February 04, 2013
Email ThisBlogThis!Share to TwitterShare to FacebookShare to Pinterest

"This was in 2008, when 90% of his purses and operating profit came from slots, so low takeout that’s needed in a system like this, new mechanisms, giving resellers a larger slice for technology, and the rest of the issues (that cost money to implement) were less important. Of course, with slots money being removed in Ontario, this type of ideal becomes harder and harder to achieve, even if it was made 100% legal."

is, interestingly, somewhat analogous to the (currently slow-motion) collapse of the American economy. The politicians, those who essentially own them, the Federal Reserve, and the shill economists who do their bidding, have chosen a Keynesian approach to 'managing' the economy. Very simply put, the application of Keynes' theories is, in this case, incompatible with their fundamentals, most notably in that Keynes recognized the need to show restraint and build up reserves when times are good.

As it is practiced by those in power today, money is created out of thin air and (supposedly) used to stimulate the economy. Of course, much like the racing industry, when the good times were being enjoyed, there was no serious thought given to either conservative or long-term, creative investment (e.g. imagine if the trillions squandered on the Iraq war had been put toward renewable energy, high-speed rail, etc., instead). Those in power, as they are want to do, simply behaved as if the good times would never end!

Of course the impending collapse of the Western economy is rather more important than our relatively trivial problems in the racing industry, yet in both cases many people will suffer as a result of selfish, short-sighted leadership.