Are the horsemen in California looking to up takeout again? As the Bloodhorse reports, it looks like the horsemen want to raise the juice on the Pick 5 from 14% to 23%, a 64% increase. Ironically, I did a piece on the last takeout hike yesterday.

One figures that the TOC braintrust sees a lower rake bet that's taking away from the pick 6 must be stopped because it's costing them money. This is short term thinking, and probably extremely flawed. Low takeout, low base-ticket pick 5's have been branded as a bet in racing, and this brand has grown all of them. If California changes the rake, they make make a few more dollars in the short term, but it will not revive a pick 6. California, and other players, will simply look to play other pick 5's around the country, not shift their wagering into a $2 base bet, that's virtually unhittable for them.

Back in 2008 at a wagering conference I had a long chat with a fellow panelist about low denomination wagers. He, from New Zealand, spoke highly about "fractional wagering" where a customer can bring $24 up to a window and get as many combo's as he or she wants for a dime, or a nickel, or even a penny per wager. They'd been doing it for sometime, and it took off. Smaller fish want to play into a pool with sharks, and this allowed them to. This is not unlike a Rainbow Six at ten cents. Over the past several years we've seen North America look towards New Zealand and start to jump on the fractional wagering bus, although we're not there yet.

Regardless, decreasing payouts to customers on a fractional pick 5 will not grow California racing. It will not revive a pick 6. It will likely just annoy the customers they have left.

Ron Burke, the leading money winning trainer in North America since my dog was a puppy, fired off in Harness Racing Update about drugs, and he being called a cheater. It was a no holds barred interview. Well worth the read.  (pdf)

Dan Needham, one of the more thoughtful writers in all of racing, wrote a dandy article about what he does best - model. He proposes a national database project that is predictive in nature about breakdowns, which can hopefully lead to real, hard, data driven policy to help curb them. I was thinking about that the other day (though obviously not as deeply as Dan) when I was playing the races. I noticed a horse was off three months, had only one work and was off a vet scratch (that I surmised as lameness issues) only a week earlier. The horse broke slow, and was pulled up. I am fairly certain there are "x" factor correlations that can predict the likelihood of a breakdown, and I hope the NTRA and the Jockey Club look into this.

Last up, I picked up my Blackberry Z 10 (at the risk of being shunned by everyone under the age of 30, along with Sid Fernando, who apparently doesn't even eat oranges). It's a really nice phone, but my twitter app seems a little wonky.

I get avatars of someone, posting as another, and vice versa the odd time. This morning I took a look at my twitter feed on the phone and saw this: 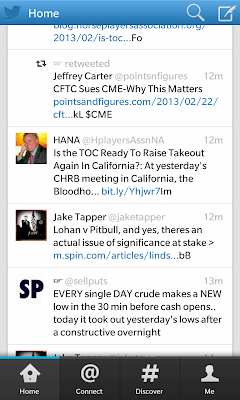 Ray Paulick is the new HANA President? Bacon has really lost his way.

Have a great Friday everyone.

at February 22, 2013
Email ThisBlogThis!Share to TwitterShare to FacebookShare to Pinterest

10.5% also works since you can expect payouts to be about that much less if the takeout rate increases to 23%.

64% is only accurate if you say "increase in the takeout rate" rather than "increase in takeout" since no one is making 64% more off such an increase.

Increases or decreases in margins are handled in gross percentage terms in finance. That's my background, so that's how I generally use it.

Ed- You could also accurately call it a 900 basis point increase.
Bumby