The Gambling Business Is Not All That Complicated 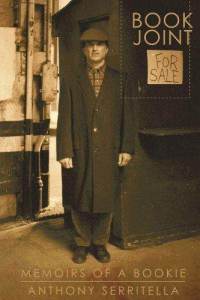 In the Toronto Sun today there was a column about the big bust of a Toronto Super Bowl party where there was (shudder the thought), gambling going on.

The meme was solely about the fact that the government is fine taking gambling dollars, but others should not, of course.
I don't think the cops did anything wrong. If gambling is illegal, well, they have to raid places where its going on. But as a dude that respects people's rights to do things they want to that make them happy - like having a punt on the Ravens plus three and a half, it sticks in my craw.

The history of bookmaking and gambling is fascinating from many perspectives.

For a sociologist they can marvel at the human's nature to make a bet on something. When Mount Vesuvius erupted it buried many treasures, but none of them so interesting to a gambler than pairs of loaded dice archaeologists found. Not only were they gambling 2000 years ago, they were cheating at gambling.

It's perhaps most interesting from an economic perspective.

Bookies are a case study worthy of any Wharton Business School course. They've had bad debt expense, risk components of criminal prosecution, the risk component of being on the bad side of a line, and myriad other externalities to work through over centuries of being in business. In the end they set their price based on these factors and have never wavered.

The juice is the juice, whether you are making a bet in 1913 or 2013 (it has not changed at all over time). The bookie is alive and well and making money. His clients are hopefully holding their own with the proper juice they've set. In fact, that's assured because the business is still thriving  - if you break your clients, they won't come back. Adam Smith would love your neighborhood bookie.

In Ontario and other places, the government has a monopoly, an almost endless revenue stream for marketing, the ability to handle massive losses, smart University economists and consultants to guide them, a massive distribution network to serve 13 or 14 million Ontarians - everything your neighborhood bookie doesn't have. Yet they stink at running gambling.

Government has had a hand in racing too, from the very beginning. Bookies didn't run racetracks, bureaucrats did. Guido from the Bronx didn't set prices, a guy that works with horses all day that takes the Horseman Group Director job does.

If racing or government really wants a proper gambling culture, and the revenue it brings, they should call their neighborhood bookie to run things. And then get out of his way. It's really not all that complicated.


at February 05, 2013
Email ThisBlogThis!Share to TwitterShare to FacebookShare to Pinterest

Interesting post. But no matter who the government gets to run their gambling monopolies,they always seem to succumb to GREED.

Most government officials (not all) look at the gambler as a degenerate who should be doing something more "productive" with his/her money.

Unfortunately, there are some racing executives and groups that have the same attitude.

I can't help but note the related, wrenching irony in the fact that the vast majority of the (almost exclusively) white, affluent males who have engineered and enforced laws relating to the disastrous "War on Drugs", the result of which has devastated the lives of countless millions of poor, non-white people, have done so while drinking alcohol throughout their lives.