Bee a Magician Steals the Show on Breeders Crown Night 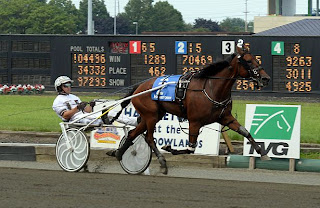 If you ever want to differentiate a "good horse" from a "great horse" the easiest way to do it is to look who sharp bettors or racing historians compare the horse to.

When did you know Rainbow Blue was "great"? When people started asking, "she's better than Shady Daisy and Fan Hanover isn't she?"

After last night's jaw-dropping performance, we are seeing the same thing happen with Bee a Magician. She is not being compared to Maven, or Check Me Out, or any number of good three year old fillies we've seen in the sport the past ten years any longer. She's being compared to CR Kay Suzie or Moni Maker. A few people (and I am one of them) think she is ready, with the right conditions, to break 150.

Will she be as good as that? Who knows, but that doesn't matter. Almost each year we see the word "great" being thrown around, where it almost becomes banal. But each time when you ask someone is "he or she better than X" there is waffling. With Bee a Magician there is no waffling. She's stamped herself as something very special and people are beginning to appreciate what they're seeing.

The quiet and unassuming daughter of Kadabra stole the show (video here).

To read a recap on the best performances of the evening (and for racing history buffs, a look at the comparisons between last night's three year old colt pace and Life Sign's Jug) please take a look at HRU on page 7 (it's a pdf).

Have a nice Sunday everyone.
at October 20, 2013
Email ThisBlogThis!Share to TwitterShare to FacebookShare to Pinterest

Notwithstanding your Canadian bias, I am in total agreement that Kadabra's daughter Bee A Magician was most impressive last night and should be leading the HOY vote.