Pick a State, Any State, Can You Bet?

There is a thread at Paceadvantage.com talking about a new "source market fee" for Pennsylvania. In effect, this means if you live in that state, you will be subjected to having your takeout hiked (if you play an out of state ADW) and your choice stifled as a customer.  Distribution of the signal throughout the state will also be curtailed. As noted in that thread, some of racing's best customers for many years are having their accounts closed.

Why, you may ask, would tracks and horsemen do such a thing to their customers, especially one which already has 30% exotic takeouts, millions and millions from slot machines, all in a sport that's bleeding handle? Because they can, and taking more of a shrinking pie is what this business has been built  hampered with for many years now. It's just the way it is, in a business devoid of critical thinking.

And as the kids say, it's pretty cray cray, because getting a bigger share of the pie for purses has never even been a "problem" for this sport.

Do you know what the UK, Australia and other places get from each dollar wagered for purses? Hong Kong? Much less than the current 7% or more than US racing does. In the UK less than 1% goes to purses, in Australia it is less than 2%. As Steve Crist wrote in the DRF several years ago:
So we're working on a problem that isn't really a problem. If handle to purses were the issue, we'd be 700% better off than the UK is, but we clearly are not. What happens when we focus on promulgating a bumper sticker policy, where the customers get left holding the bag? Your national handle goes down, and as more states who see what you did try it, the problem gets worse. When that happens, revenues, racedates and purses (the thing you were trying to "fix") fall, because handle has fallen. When slots get the old heave-ho, well then things really get bad.

Look at this list of states and what you as a customer have to do to be a customer at this big ADW: 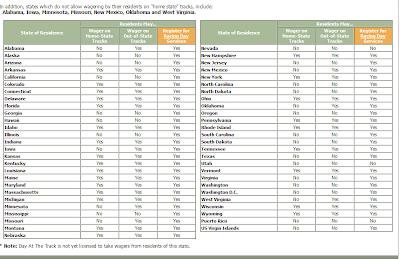 If the thread at Paceadvantage.com is correct, you can change the above beside Pennsylvania to "No" and "No".

When we tell customers "no you can't bet" a not-so-funny thing happens. They don't bet.

Picture the above if Amazon.com or E*Trade or Ebay or iTunes had the same restrictions. We'd probably never even have heard of any of them, or worse, China probably would've created them and taken all the revenues through an offshore network.

In Ontario this past week, one of the government officials who is now in charge of racing in the Province said this: "We discovered the [slots] program had allowed the industry to turn its attention way from its customers — racing fans and horseplayers."

If this official looks south of the border he would see the same thing happening, although it can be argued, it's even worse.

at October 18, 2013
Email ThisBlogThis!Share to TwitterShare to FacebookShare to Pinterest

This doesn't surprise me, when California raised the takeout, the biggest mistake the tracks made was allowing the entire increase to go to purses. So even though handle with down,the horsemen didn't feel it. Only the tracks, bettors and some adw's. That's why there is no chance of them rescinding it. How horseman got all this power in the first place is beyond me. Also RaceTracks have always been clueless when it comes to take out. They don't really have the business, economic or mathematical skills to truly understand it.

I'd like to see HANA send a letter to the Governor of Pennsylvania asking him to take away slot payments to the Penn Horsemen.

Bettors probably should think about doing that. How do they have the audacity to do this while taking all that slot money?

Don't they know this drives betting money offshore? I read the minutes of these commissions meetings when they do source market fees and no one mentions offshore, or customers; it's mainly arguing over who gets what and who wants more. They can't possibly not know this hurts racing can't they?

I already have. In fact, I've gone one step futher. I bought rental property in a few different PA counties just to have addresses tied to my letters urging a re-examination of where exactly the revenue from Casinos goes. I've even asked a few tenants to consider joining my fight.