I remember when I was seventeen. I moved from my town in Northern Ontario to go to school in Toronto. I had never been to Toronto much in the winter before, only in the summer, and I knew it was warm and muggy. This was a far cry from my town, which was generally mild in the summers.

In my first year University I lived in a dorm that was built in something like 1850. In the winter it tended to keep the heat in nicely, but I anticipated it would get warm in the summers. The funny thing was, summer came quickly that year. In late March we had this massive heat wave. Studying for April exams was excruciating because it was literally 100F in the dorm.

I thought to myself, is this the way April was down here? Is it always this hot?

On Monday I took a break from sweltering studying and went to the track. I scored a nice ex in the second and hit a tri in the third. I made a few dollars.

Hmmm. How about an air conditioner? That would be sweet. 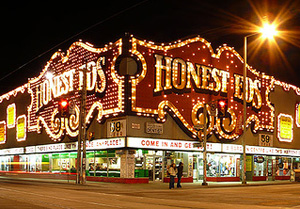 I walked to Honest Ed's (if you don't know that place folks, you should because if you are a poor student, it rocks) and saw they were on for less than $200. I did not have enough, but my dad was in town. I could bum some cash off him for the remainder I hoped.

Later on that evening I was in the sweet coolness of my room, surrounded by other sweltering people who wanted to study for an exam.

Thinking it would be like that each year in April or May weather-wise, I thought it was a good investment. However, 20 years plus have gone by since then, and guess what? The weather never got hot like that in April again.

The moral of the story and the point of it, is nothing, really. I was grumpy yesterday and I didn't feel like speaking about a dozen tracks nearby that may close, or all the other poor headlines of late. Plus I was speaking to Keeneland Gal on twitter and she got me started on the weather.

Have a great (warm) Thursday everyone. And if you are studying for exams in an 1850 residence tonight, try your luck on bagging an air conditioner. The Greenwood teletheatre is only a streetcar ride away and the first post at Woodbine is 7:30.


at March 22, 2012
Email ThisBlogThis!Share to TwitterShare to FacebookShare to Pinterest

loved this story. and sometimes the point is that there is no point.