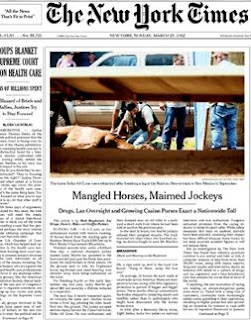 If you flip on A&E for their hit show Intervention, and give it a watch, a common theme emerges.

There's someone in trouble, they tend to not realize their problem is a big one, and they blame everyone else for their life. They usually resist help at all costs and react to anyone with anger.  They sometimes feel things will just get better on their own. Then, later, they finally come aboard that they have an issue, they get help, deal with it and hopefully get better.

I think we're seeing similar play out with the New York Times hit-piece on racing.

First we saw some anger. "How could Joe Drape do this?" was a common theme. Poor ol' Joe's twitter picture was popping up on dart boards in shedrows across the entire nation.

Then we saw some deflection. The meme, "this was really about quarterhorse's, not us, you know" resonated. It seemed to make people feel better that Quarterhorse racing had a higher breakdown rate than Thoroughbreds and it was skewing the overall numbers. This was also mixed with some anger - anger that Joe Drape could allow this grave statistical injustice to occur in his article. People who took part in this stage also seemed to like the anger stage.

Then we saw "don't blame me, blame someone else" stage start to bubble. If you were a big proponent of dirt tracks, well, it wasn't that which was causing any problem. Dirt, according to them, played no role whatsoever in these breakdowns that the Times was talking about. If you were responsible for breeding these fragile beats, well it wasn't your fault either. It was the dirt tracks. Or drugs. Or maybe it was Joe Drape's fault. If none of that stuck, well the article was really about Quarterhorse's anyway.

We saw some enter the "this will get better on its own stage". The New York Times is a left-wing, agenda driven rag that no one reads. In addition,with trillion dollar deficits and a bad economy, people don't really care about horse racing anyway. This will go away.

Those aren't all of the people, nor is it even a majority of the people, and they are not crazy, nor are they stupid. It's just the way it is, because it's our game. In our cocoon here in racing, we like to commiserate together. Commiseration, deflection, anger, blame, and an willingness to pass the buck unfortunately doesn't do us any good.

We can nit-pick this Times series as much as we want for its alleged unfairness, but Thoroughbred racing has a breakdown problem. Its had it for years. We all know this.

In 2012, animal issues have reached a zenith, and they're not going away. And I don't mean with PETA types, they are probably best ignored, but with the mushy middle; the folks who are currently deciding between Obama and Romney. It's probably only going to get worse.

I am not smart enough to come up with an effective strategy for this deep-seeded, age-old problem, but Lord knows we certainly have to admit we have one, and someone better look at fixing it.

The Interventionist has left the building. It's time to move on.

at March 27, 2012
Email ThisBlogThis!Share to TwitterShare to FacebookShare to Pinterest

Well, well, well....OK. First, I'm one of those who hates this piece. I don't think I'm in denial. God knows I've found enough to criticize the industry about in the past. My problem with The Times is I don't think they were pursuing truth and I, obviously don't think they got anywhere near it. My greatest value is truth. Even more so than value at the windows. That said, at your suggestion I'm going to move on.
Your central thesis: we have a breakdown problem. We all hate to see a horse breakdown. we definately see more of it these days. I would ask, however, how much of that is perception. We see (through simulcasting) so many more races. Do we have any kind of a long-term study? If I had to guess, because I think we have too much racing, a less sturdy breed, too much training via pharmacology, and an increasingly screwed up purse structure, that the answer is yes. The Times piece, at least so far, hasn't come close to answering that question. And I hold no hopes that it will.
Let's talk about track surface. I like synthetics, especially Keeneland and the So Cal tracks. I prefer betting synth to dirt. Theoretically, I'd be pleased with more synth and less dirt, but I don't think bettors in general want that and I don't think the case has been proved that synthetics, other variables being equal, are safer.
Medication and drugs are the obvious target. I'm a big picture guy. I believe the "generalness' of things gives rise to the specifics of things. I'm for a ban on raceday meds. I don't think that bute and lasix cause breakdowns. But their legality and ubiquity do help creat a culture. Besides their ban I'd like to see the states and racing associations take over veterinary care. yes, you run into the problem of how to handle the care of horses of course. There must be a solution to that, though.
Finally, you have the amount of racing being conducted. Simply...there is too much of too low quality. The States have to take the lead there and horsemen have got to bend some. The money is there now, at least where slots abound. It's just a matter of how to disperse it.
That's about all I've got.

No surprise we're of like minds or at least of like TV watching habits. I am obsessed with Intervention but it always depresses me that those who agree to go to rehab after imploding their lives nearly always relapse. Bums me out because I want them to do well.

On to the NYT- I actually liked the first segment or showing up the racing comissions as being the ineffectual bureaucracies they are. The Southwest quarter tracks have a big problem, and to those in racing thats not news.
I do take issue that the NYT stated there have been 3,800 drug positives for "illegal" medications when I believe the number of Class I or II positives which truly are illegal substances are very very low, while the remaining are therapeutic drugs allowed in racing with have microscopic overages.
Lastly - it was a survey of race horses that lumped quarter and thoroughbred horses together (and they are very different breeds with very differnt conformation and styles of racing) but left out standardbreds which are race hroses as well. HAd they included them, I am sure the "breakdown" rate would have been lowered over all to .1 per 1,000. Not denying breakdowns are deplorable and dreaded in tbred racing and should attacked full on by the industry, bit a stude of race horses shoudl inlcude all breeeds, not just the ones that suit your numbers.

Until this over I am going to double up on broadcasts of "I Survived" and take a break from Intervention.