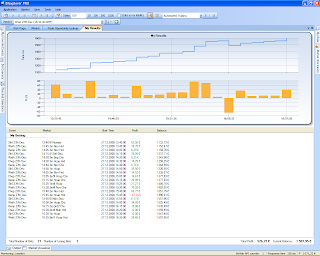 Ray Paulick seems to be a bit of a polarizing a figure. It seems some people like his style, and some people don't. Very few do not have an opinion on the man. However, one thing he always does is spur discussion. In his latest piece he looks at Betfair and if they should, or their model should be embraced here.

I was reading the Dan Patch Story recently, and one quote showed how we thought way back in 1900. It was a snippet from racing about the new invention of cars. Racings response was that cars would hurt racing, as the horse was a transport vehicle and attracted people to harness racing. They wanted the building of roads banned in some areas of the US and lobbied for it. So it is not surprising that some of the responses, and the responses we have seen over the years from North American racing, about betfair are to be expected. We tend to fear the new and believe that protecting our sport is more important than growing our sport. I dare say this policy has not worked very well, yet we still seem to offer it out whenever we are confronted with a problem.

I remember being at a conference last year presenting on the future of wagering. I referenced betfair with some stats and so on. One of the presenters there with me was a guy who plays betfair for a living. He hooked up his computer and popped up a betfair race. It is where I was converted that talking about something is not as effective and seeing it in action. When he loaded it up there was a race just about to go off at a track in the UK. It was a fairly normal race, not a stake or anything. At 1 minute to post there was about US$2.2 million matched. Then the race went off; it was a 1 3/4 mile race, or something like that. He gave a play by play while the trading was in running. "Ok, the seven has gone down to 2-1, so he must look good; now the three is shortening. Oh, now the four is taking money so he is coming on" and so on. There were a few audible gasps from the crowd. About another $600,000 was bet while the race was going off. People were amazed and virtually everyone said "wow, does that ever look neat."

Hopefully we see more and more talk like this from people in Ray's position. The pari-mutuel system is broken, and has been for some time. Clinging to the past is not a policy. There are two completely different racing customers; one who is there to mess around and have some fun, and one who is there trying to play racing as a brain game with the hope of making money and supplementing an income. The interface for the former is the racetrack - the sights, the smells, being there, or betting it on a nice video interface. For the latter there is this screenshot - this is not your grandfathers racing, and someone out there knows that, and is succeeding offering it out to those players.

If we start looking outside our own little worlds here in racing to find out what is working and what is not - and implement what is working - we will be much better off as a business.
at January 07, 2009
Email ThisBlogThis!Share to TwitterShare to FacebookShare to Pinterest

I watched your buddy give the Betfair demo at that conference. One of the most powerful people in Canadian harness racing wanted him escorted out in handcuffs as he claimed he had just commited a crime and broke the law. It was priceless. No wonder there is never any changes over here.

That was pretty funny wasnt it?

The one I was speaking about was the one in NJ, tho. That one had a nice live race and there was a lot of betting action on the interface.

No cops there to take him away. The cops in New Jersey must be very nice fellas :)

Hi,
I was involved with Betfair when they first moved into Australia, and the reaction from the old crusty authorities was much the same. Declaring we were the devil reincarnate, a front for laundering money for al-Qaeda, the incentive for every race in the country to be rigged, and that most tracks would have to close down because of all the turnover being taken away from the totes etc. All pure fantasy to hide the fact that all they were worried about was the money. Betfair in Australia are now licensed and paying their way, sponsor a racetrack (Betfair Park, formerly Sandown), took one state govt to the High Court and won when they tried to ban them, forced the state govts to drop the anti-constitutional laws blocking betting firms advertising across state borders, and with the support of other betting firms (not the incumbent totes) Australian gamblers now have a competitive market for the first time ever. Harness racing is now regaining lost punters (gamblers) who had become disillusioned with the tote dominance and demise of on-course bookmakers for all but the big meetings.

Thanks for the comment Scott. We followed quite a bit of the chatter here on the blog on the Aussie situation. It was eye-opening but not unexpected.

I have to go through your blog and many of the blogs you link. They look interesting.