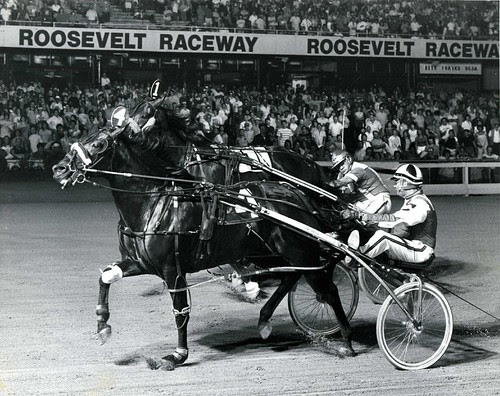 The Cam Fella final was this past weekend at Woodbine and it got me thinking about the Pacing Machine. 100 years from now they will be talking about him, not only for his racing career, but for his stud career. He has sired something like 16 millionaires, sires colts and fillies that can both go like the wind, and his mares and studs produce as well. The consummate professional racehorse and the Northern Dancer of the hoppled-gaiters. He left us too soon quite frankly.

I remember as a kid in the early 80's going to see him race - he was by far my favorite horse, as he was most Canadian harness watchers. In fact, I still have my "Cam Fella the Pacing Machine" button that they gave away at one of his races. Cam took on everyone, everywhere, and rarely would you see him throw a bad race. Nowadays where a 12 or 14 start season is considered pushing it, Cam would have a laugh at that. He won 61 out of 80, his last 28 races of his career were 28 straight victories. And not fluff wins either. Free For All stakes wins against horses like JD's Buck, Sokys Atom, Millers Scout, Coal Harbor and many other hard hitting racehorses. Most of his races he was under the stick, eventhough we all knew that he did not need a whip. He knew where the wire was. They simply don't make them like him anymore.

For thoroughbred fans who read the blog (seriously, thanks for looking in, since us poorer cousins need all the help we can get!), I know many of you do not even know who Cam Fella is, and that is a true shame. It's not your fault but ours. Regardless do me a favour and watch this Youtube race clip of him. This was back in '83. The owners of US based It's Fritz wanted to have a race with Cam on the big track. It's Fritz was winning everything down south, and there was an aura that Cam's crew was afraid of him (from the papers at that time). Of course it was just promo and so on, but that is what was said. So Mr. Clements and the Cam Fella Express (as they were called) went down to the Meadowlands for the big race. It is perhaps one of the most talked about races in history. I was not there, but being a horseplayer I can imagine folks ripping up their tickets on the Pacing Machine about the three quarters, only to find out what we all knew - he was 100% racehorse. Boy, I loved watching that horse. He represented everything that harness racing is about - toughness, blue-collar, and a sport where everyone has a shot.

at March 23, 2009
Email ThisBlogThis!Share to TwitterShare to FacebookShare to Pinterest

Horses like Cam Fella and Niatross make me laugh when people talk about horses like Donato Hanover and Deweycheatemandhowe. Back in the era of Cam Fella, horses were raced by sportsmen; they dodged no one. These days horses are not raced, they are managed.

Even if you accept the fact the horses may not be as durable as they once were (though I wonder why the over night horses can race those many starts), there is no excuse for dodging horses. Look this year at Dewey; he skipped the Yonkers Trot (while maybe not as prestigous as it once was) which had a large purse for a $70,000 overnight stakes at the Meadowlands? I know why they did it; they wanted to win the Hambo for the breeding rights.

While I admire a good horse when I see one, you can't be a champion in my eyes until you beat top company on all size tracks (even the half miler).

In the past two years, Lou Guida was elected to the Hall of Fame in the states; he was praised for what he did with regards to syndicating horses. I disagreed with his election; as far as I am concerned, he ruined harness racing when he made racing an investment instead of a sport (yes, gambling). While racing may have had a few good years after he was in the game, I believe that is what started the sport into its decline. You lost the ability to identify with champions and top overnight horses that raced year after year and ofthen.

I cant disagree with that very well thought out analysis. However I do cut people some slack, since I can not say I would not do the same. The game has changed.

I hope we see more movement to address the inequities in breeding versus purses like Mr Gural has started to mention. It is well worth pursuing, and maybe we will be worried more about racing horses rather than protecting them in the future.

If you are going to talk about Cam Fella, then you got to link the Cam Fella Story.

I saw Cam a few times. I remember vividly the Confederation cup at Flamboro Downs when Pat Crowe smiled at the crowd down the home stretch twirling the whip. Cam driving home once again. He hardly needed any urging. Still send chills down my back when I watch his video wins. Especially against Its Fritz.
Always in my memory Cam.