The post draw is complete for the Preakness. I was slightly confused at the low morning line given to Derby winner Animal Kingdom - thinking 3-1 would be more than fine from out in post 11 especially - but it is what it is.

It's not like you could take too much advantage of any Preakness feelings anyway - Betfair did not even offer a book before today.

There has been copious chatter on the web about disclosure, with rumors abounding regarding an off-season chip surgery for Uncle Mo. That surgery question would not be answered, even when the connections were pressed. A lot of us thought it was over-the-top to be so secretive if your horse had a procedure because the general public knows that any athlete - human or equine - will have sports injuries to tend to. Enter Pretty Katharine. The world record holding mare's early season progress as a three year old was updated in the media.

Lo and behold: “She wintered in Ontario at Anna Meyers’ farm, Emerald Ridge Farm,” noted trainer Casie Coleman. “She was shut down for approximately six weeks. She had chips taken out of her hind ankles at Milton Equine Hospital after her last two-year-old start."

It's not that difficult, folks.

Free race programs are out for the Molson Pace elim card at Western Fair.

We spoke immediately after the Arkansas Derby about a hopeful equipment change for Sway Away. Jeff Bonde has made a change for the Preakness, cutting away the cup. I think that is a fantastic move.

Since 1984, a horse that has started in the Derby has won every Preakness but three. And one of the exceptions is Rachel Alexandra (2009), who was coming back in two weeks and one day after her win in the Kentucky Oaks. Fresh horses don't win the Preakness. Horses coming back two weeks after the Derby do.

Maybe because I am a horseplayer, or maybe because I look at data all day for a living, I get a little stuck with a lot of pronouncements like this. One would completely expect the above to be the case. The best horses run in the Derby with the highest graded stakes winnings, who are sound. With that encompassing data pool who else is going to win the Preakness, or any race, two weeks later, as an outlier? 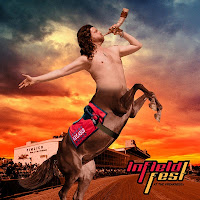 Mark Stevens in Your Marketing Sucks spoke about older-time marketing and the need to get $1 of revenue for $1 of your ad spend, and how this has completely changed. The Internet, using ads, social media, old media and more, can allow for much more than dollar for dollar windfalls. 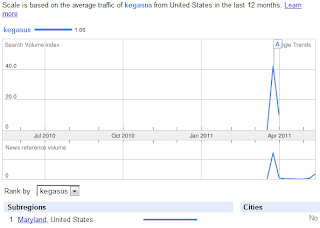 This return on ad spend has been pretty stout for this campaign. There was a nice web-search spike when he was announced, and the top state for the search term is Maryland - exactly what they want. There are not too many casual race-fans unaware the Preakness is going this weekend, and if the half man, half horse can bring another 20,000+ folks to the infield (which is likely) spending $100 each, their marketing clearly doesn't suck.

Jessica says OMG regarding the hand-wringing regarding a turf/synth horse winning the Derby, like somehow this is a puzzle beneath the game of handicapping. I could not agree more with her. Animal Kingdom ran a decent fig at Turfway, he has some turf breeding, he has some stamina. The question to answer is a question we put to ourselves for any other race - can he move up and win? The exact questions are the ones that are a little different, like: Does he have a turf/synthetic foot or can he move forward on dirt, does his trainer have a record with moves like this, how did he work over the dirt, does he have a good action for dirt on video, and most important - will his odds be too high because of the anti-synth groupthink?

Handicapping is a great game, and the principles of it in terms of gambling are the same, whether the horse comes from Mars, or runs on jello. The questions you have to analyze just might be a little different.
at May 19, 2011
Email ThisBlogThis!Share to TwitterShare to FacebookShare to Pinterest

What do you mean "cutting away" with the cup? Complete elimination of the blinkers - as in Blinkers Off?

It is not yet denoted in the DRF past performances.

Been looking at Sway Away - he's live for the exotics. Love Bonde's training after they didn't make the KY Derby field. Good post and Garret Gomez won't make that move too early. Interesting horse at the price.

You can change around blinkers and modify them in many ways. They can be a full-cover, have slits, cut some of the cup etc. They are cutting some of the cup, so he can see right and left a little bit.

The horse is flat-out goofy in full cup.

Kegasus has done what's been asked of him. He doesn't appeal to insiders & since insiders have not come up with a single angle in marketing to help racing in 200 years, it should not be looked at as a negative.

To try and wager on the Kentucky Derby is hopeless, you'd be better off putting all the horses' names on a dart board and making your picks that way. The Derby has it's own orbit, meaning, it's such an unusual race, with many of these horses having no real race experience (or conditioning) under their belts. The long shots can, and do, win. Giacomo/Mine That Bird

As far as the Preakness, in my opinion it's become the "tarnished jewel" of the Triple Crown. This is a race that should attract record attendance due to the fact that we all want to see if the Derby winner has a shot at the Triple Crown, when in fact, it's attracting college kids and uninterested non-horse people that intend to put all their money into beer, rather than into wagering and providing longevity in the sport. Pimlico is scraping the bottom of the barrel in their marketing, or should I say, scraping the bottom of the keg, and to me, it's completely embarrassing. Sometimes no marketing campaign is better than one that reduces the sport's integrity.

My picks: Looking at the A.P. Indy horse Astrology to be up there; Mucho Macho Man; Sway Away; and if all goes well, Animal Kingdom to win it!