Around the World in Futures Betting - Preakness Odds, Top Sires & Even Some Harness Action

In the early 2000's offshore sites permeated the landscape and each one of them - fighting for their slice - would have odds up in record time for many horse racing events. Of late, this is not the case. As we noted last year, the "Horse of the Year" futures were not even offered at an exchange, let alone a bookie site, and stalwarts like Pinnacle Sports did not even offer Derby betting. One wonders if it is a sign of the times, seeing there are simply less people interested in the sport, or if a lot of these sites have said "no mas" to betting giant Betfair.

Regardless, if we do some digging, we can find some futures action out there, and some of it is pretty interesting.

"All Horse Racing" has the only Preakness Book I can find on the net so far (pdf alert!). When you see the 5-1 offered on Animal Kingdom and 7-1 on Dialed In, it might come as a shock, but when you look at the last horse offered, we see why they are so high. The Factor is listed at 9-1, even though he is not going. This is reminiscent of the old 5 Dimes, that would leave horses up after they were reported out. Any way you slice it, this is probably a bad book.

Betfair has no Preakness futures betting up, but this is not overly surprising. Not being legal in the US there is little pressure to get a book up early.

In Australia, where betfair has been embraced by customers and fans and is 100% legal, it's a different story. The Melbourne Cup has already had about $50k matched, it is a pretty tight market, and the race does not go off until November. This is an awesome odds board for those looking to trade, or for those who have a favorite - the chalk is about 20-1! 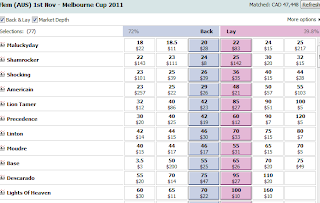 Continuing down under, this week's BTC Cup is supposed to be quite a thrilling race between Black Caviar and Hay List, according to the press. The press doesn't bet much perhaps, because punters have traded Black Caviar all the way down to 1.22, or about a $2.40 mutuel. 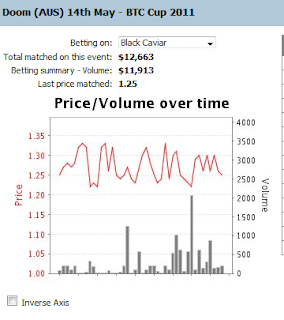 Something you will rarely see in North America is a top race with a horse at 1-5, and another top race in two weeks with the same horse at 1-5, but you do with Black Caviar. She's traded at 1.29 for a race on May 28th. People have the fever.

Betfair is allowed in Sweden and harness racing makes the list for Futures. The Elitlopp is set for this month. There is very little action, as one might expect. North American hopefuls Define the World and Arch Madness are in the mix, and have been added to the antepost market.

In the UK the market is huge. There are dozens of things to bet on and the Epsom Derby has already got over $500K matched.

Recently there was a horse purchased on Twitter called "Twitterhorse". It's an offspring of Dark Angel, and that sire has traded at 3-1 in the "Leading first season sire" bloodstock market.

Word is that Frankel's next race will be at Royal Ascot and bettors are hammering the talented colt.

France's politics are what they are, and they have not been kind to punters in terms of freedom to play, but that has not stopped the antepost market for the Arc. Only $25k is matched, but there is some action on the two Arc potential chalk - Workforce and So You Think.

Futures markets are not very popular here across the pond, but bettors seem to like them elsewhere. With mechanisms like exchanges bringing them to the masses, there are plenty of choices for punters.
at May 11, 2011
Email ThisBlogThis!Share to TwitterShare to FacebookShare to Pinterest