Well, we went through two of the two year old races and they were pretty cool betting affairs. But now we take it to a whole new level. The colt pace and colt trot for two year olds are as good a races, with as good a two year old stock you will see in this series. Last year the field for the trotters was sub par and the colt pace was not at all deep with the absence of Somebeachsomewhere.

First up, the colt trot. Question: What is the easiest thing to do at the top levels in harness racing? Answer: Go undefeated as a two year old colt trotter. Virtually every year there is a trotter who runs the table. The reason is pretty obvious - if you have some talent and stay flat you can win because trotting depth is horrible. If we look at history and the history of the BC we see this time and again. Dewey: Wins last years BC in 157.1 with a back half of 100.1. Cantab Hall: Perhaps the most bizarre trotter of the year voting winner ever, won his BC by daylight in 56.4. No one was even in the picture at the end, except him.

Well not this year folks.

This is the finest group of 2 year old trotters (in terms of depth) assembled for a BC final that I have ever seen, and they have already set world records. If you had ten million bucks, I doubt you could afford to buy the top three horses in this race. If this tilt goes in 157, it will have to have eight breakers or be raced on jello. 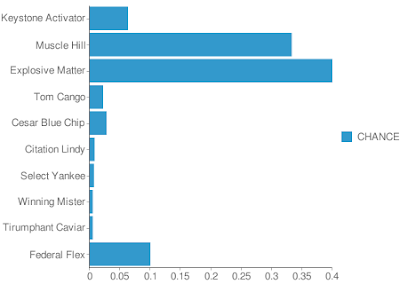 Muscle Hill (2-1 fair). What can you say. Seven for eight and he has shown natural speed. He is the favorite by the public and is deserved.

Federal Flex (9-1 fair). A wise-guy horse for sure. The dreaded ten post, but this colt can fly, and last week I would bet that he was not 100%.

Explosive Matter (3-2 fair). Here is my favorite, and the horse I will more than likely be betting. He is five for five and I think, despite this monumental task he will go six for six. I think he might turn out to be better than many trotters we have seen over the past decade, and that includes some good ones.

As for the rest, well there are some decent plays for the back end of the exotics. I think Tom Cango will be overbet, but he could easily hit the board. If for some reason the big two falter, and Flex gets a bad trip from the ten, I think Keystone Activator might be there. He has 55 speed and has some go. Cesar is a nice horse.

I am really looking forward to watching this race, especially to see if the next real superstar in our sport comes forward.

Next up: the 2 year old colt pace. 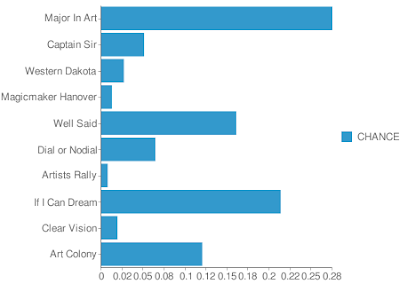 Here is another fantastic betting race. There is no Somebeachsomewhere in here. If we look at the PP's we see just how mind boggling the Beach was last year. He went 49. There are no 49 pacers in here. But that makes for a great affair.

The chalk should be Major in Art (5-2 fair). He was wonky in Canada but he returned to be good last time. I will not be betting this horse as I think he'll be overbet, but he is the most likely winner and he should get a fair trip from inside.

If I Can Dream (7-2 fair) went a crazy mile at Dover. I would pitch his last in the wind. He should leave and get a good spot, or a good trip. He is a likely second choice, but the last race might scare some off.

Well Said (5-1 fair) in my opinion has more pure talent than all of them combined, and he will be my play as I expect him to be underbet on the board. This colt has two things 1) He is a very inconsistent horse and 2) He has extreme talent. His Metro Final performance when he was hung out like a piece of laundry was a great effort and it would win Saturday's final ten times out of ten. I think he could be a great play at a good price if he's right. I did not mind the way he raced last time. He might be pointing as Pierce looked very disinterested in winning the race.

As for the others Dial or No Dial has a ton of talent, but seems to be tailing off. I do not like Art Colony from out there. The horse should have probably won last week, and he probably should have won his last stake as well. At 7-1 I might even have him too low, when I look at it again.

We'll be back tomorrow to have a look at the 3YO races.
at November 27, 2008
Email ThisBlogThis!Share to TwitterShare to FacebookShare to Pinterest