The last, and biggest Crown event, is the one for 3 year old colt pacers. In this edition we have one clear choice, one clear second choice and the rest.

Although he was not a super-horse by any stretch, this race does remind me a little bit of the Goalie Jeff Breeders Crown; in that the fair odds are so low on a standout. Jeff won easily, but there is one clear difference and that is Shadow Play. I would submit that this horse, in the absence of one of the best horses ever to set foot on the track, would be chalk in many of the previous Breeders Crown's for colt pacers. It is somewhat unfortunate really. I guess could be said about Affirmed and Alydar or two other great three year olds. If one of them were born in a different year, they would have had different places in history.

Anyway, here is our rather pointless fair odds look at this race: 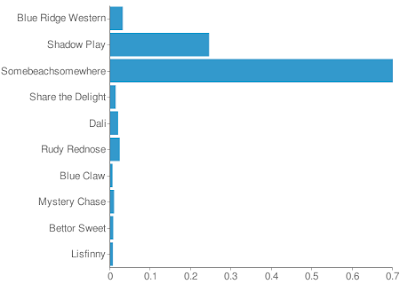 Beach looks like there is little chance he will lose more times than 20 or 25 out of 100 in this situation, but his last tilt he was a bit of a runaway, so I dock him a little bit. It does not matter one way or another. He will be 1-9. If he races like he can, it is simply a formality. We are not giving any great handicapping insight here.

I would run the fair odds for the exactor, but I am too lazy. I would think that the ex will be the lowest in BC 3YO pace history, in the probables. These two horses are lights out better than the others right now.

We get to watch the Beach for the last time on Saturday. I am pretty certain we will not see another one like him for a long, long time. So, sit back and enjoy this race. That is what I plan on doing. He gave us a fun ride.

I hope he wins by twenty.
at November 29, 2008
Email ThisBlogThis!Share to TwitterShare to FacebookShare to Pinterest