Let's do some handicapping. This years Breeders Crown races are a superlative betting affair. The 2 year old races are especially interesting because the fields are either evenly matched, or there are two or three potential good ones knocking heads.

First up: the 2 year old filly trot, which is race 2 on Saturday. "No Snow White" 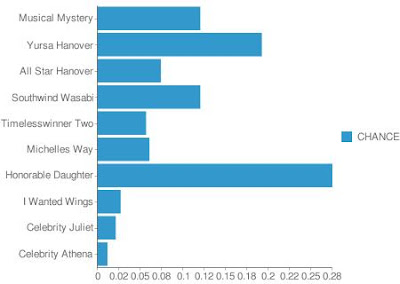 This tilt comes down to two questions, I believe: Who shows up and who gets the best trip. Despite the record of Honorable Daughter (5-2 fair), she does not stand out, although if she races back to a couple of her running lines she deserves favorite status. She has tactical speed, has shown a maturity that usually wins 2YO trot races and has good connections. Last week makes us wonder if it was the wind or what, and that might juice up the price.

Yursa Hanover (4-1 fair) has some go, and shows tenacity. She deserves to be second choice. There are a host of others who show 27-28 quarters and decent 156 speed. This is a puzzle. I will be looking at a physical inspection and an overlay in this race. I don't see too many hidden positives or angles here that can help me - what you see is what you get. 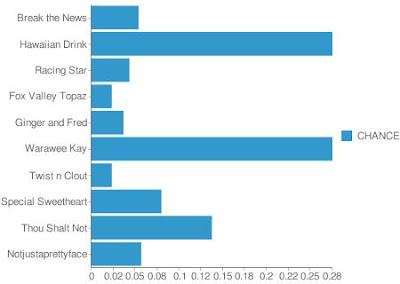 The 2YO Filly Pace is a super race. One filly on paper looks like a solid chalk, but I am looking at the presumed second choice: Warrawee Kay (5-2 Fair). In August she scorched the Lexington Red Mile in 51. Her sub 27 second quarter was a tough test, but she had plenty at the end. I think she must have gotten tweaked in that affair. She might have bounced, then had a nice break with a couple of easy Q's. This helped her I think, and any return to her Lexington race stamps her as a decent priced possible. What can you say about Hawaiian Drink (5-2 fair)? She looks the best. But I feel she is ripe to be picked off by Kay. And more importantly - she will most likely be heavily overbet.

There are some other fillies here that are interesting to me, if they get some racing luck. Thou Shalt Not has shown maturity and some go. She is versatile and with a trip, and if the top two are off their game, she might make some noise.

Another good betting affair, regardless.

We'll return to have a look at the other two year old races later. Anyone see anything in the above two races that disagrees? If so, let's hear it and see if we can uncover a winner or two.
at November 27, 2008
Email ThisBlogThis!Share to TwitterShare to FacebookShare to Pinterest