Normally with a horse of the year candidate in a trotting field, one would expect a walk in the park. Not so this time. Not only does the division leader have a tough post, he had a throat issue that had to be taken care of. This is to me, the most interesting and anticipated race of the entire Crown.

I know what some are saying: 'He had a bad post at Mohawk and won easily!' Well at Mohawk in the CTC he got the lead in two jumps, had a long straight to do it on the 7/8 track; and then he got a two hole trip. The chances of him getting a trip like that are low at a track like Mohawk let alone the M, and I would be surprised if the colt will get his own way Saturday.

This race can go many ways: In Focus has plenty of speed and should get the front. The big horse will probably float out but he'll have a target on his back from Messrs Tetrick, Campbell and Sears. Each of those drivers want to be in one place - on his back. If Dewey decides to fire out really hard, I can not see In Focus saying whoa right away and him getting a 28 quarter. If Ray goes he will have to work hard, and if he does make front he will probably be attacked by whomever is on his back quickly and with purpose.

That is the way I see this amazingly interesting race's set up anyway. I think there is a huge probability that this horse gets a tough trip.

As for betting, he is a fine horse, but not a dominant one. His wins have been tight this year, and he has been under the stick in many of his races. I am 100% sure he will be overbet, so like last year where I would not have bet Donato Hanover with stolen money, I have to look elsewhere. Here are my fair odds for this race: 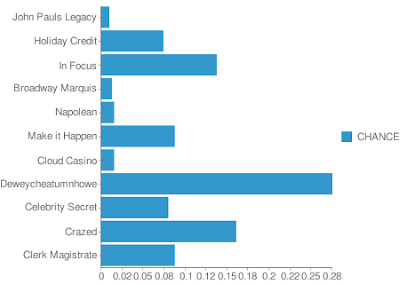 As you can see I have given the inside speed their fair share of chance. Both the two (12-1 fair) and three (6-1 fair) are capable (52-53 speed) and one of them has a chance to steal it, if sharp, and if the outside flow floats and gets bottled up.

I have also pitched Clerk Magistrate's (11-1 fair) last race. This could be a mistake. He is a decent horse, but off that bad line it raises questions.

I have docked Celebrity Secret (14-1 fair) because of his gate trouble. I know this horse was 1-5 against Dewey (5-2 fair) and has beaten him fair and square, but I can't see him getting a perfect trip if he even stays flat.

Crazed (5-1 fair) is in no man's land, but he does have a nice advantage: Tactical speed and he can keep his eye on Dewey because he leaves from just outside him.

I think my bet will be a longshot, as this race is ripe for one: The other Schnittker horse, Make it Happen (fair odds 9-1). This horse almost beat Dewey in the Futurity while coming off his back. He has tactical speed, one of the sports best drivers in big money races, and he will be long on the board. A combo I like to have in a race like this.

One thing I do not hope for is that Dewey throws in a bad one with that throat issue. He deserves to win. He has been the best, he has tried his guts out every race, and the connections are exactly what this game needs. As a fan, I hope Dewey wins for everyone involved.

I will not be handicapping the 3YO filly trot, or the 3YO filly pace. I do not like either race for betting and I think I can not find any value.

The 3YO Filly Trot is full of questions. John Campbell takes over on the division leader Lantern Kronos. If right she should win. Stage Show is a likely second choice. Creamy Mimi loves the oval, but I think she won the Oaks based more on the others not having a great day, than she having a great day.

In the 3YO Filly Pace there is a standout and that is Native Bride. She is 5-2 in the morning line but that is an awful line, in my opinion. She will be, and should be, even money.
at November 28, 2008
Email ThisBlogThis!Share to TwitterShare to FacebookShare to Pinterest