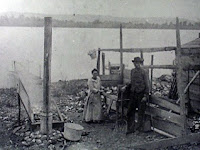 Old time racing should love this article to change the Interstate Horse Racing Act. In essence, it states the mantra that the producers of the product should get upwards of 90% of the revenue. The resellers should get a few scraps. In effect they want two things: 1) Reverse the rules of 500 years of capitalism and 2) Do the opposite of what successful gambling businesses do.

But I guarantee racing will love this. It gives them more money, in a pot they think is static, like we are an electrical utility.

This of course will not result in more money. Handles would more than likely be off 40% or so if we took money away from the sellers. When these folks learn that handle is not constant it will be a fine, fine day.

There are virtually dozens of things in this article that make little sense in the gambling economy, or frankly in any economy. A few parallels?

* A songwriter gets about 10% and has to pay a packaging fee for a song. They get about 7% of sales.

* An author writes a book and gets about 7% of revenue from it.

Your sales of songs, books and bookshelves would be off by probably 95%. But somehow, like this writer says, we are supposed to believe that handle would stay the same. In fact he even says so.

Yep, completely change the model, taking money away from customers and resellers and everything stays the same - we still have that (like magic) $1.5 billion dollars!

Articles like this tell us that we have a long way to go to change the face of the game in North America, and get people to lose the monopoly mindset that has been an albatross around our necks.
at December 19, 2008
Email ThisBlogThis!Share to TwitterShare to FacebookShare to Pinterest

What do you make of the example of lotteries? I think that is a valid example.

Of course, this would be terrible for bettors, and many would quit altogether or be forced to only bet offshore with bookies or exchanges.

What reseller would do it for 3%? The only way this would work is if there was a central betting hub or if tracks cut out resellers altogether and set up their own ADWs like Woodbine has.

And you can bet that if this happened, takeout reduction and/or substantial rebates would not happen until they see their bottom line fall, which will take some time, because the first year the tracks and horsemen will see a substantial gain (even though handle will plummet) thanks to cutting out the resellers.

Lotteries, or anything are an ok example CG.

but look at what real businesses do?

Lottery: 1) Spent billions on a distribution channel to sell the product. 2) Pump back piles of money and creating new games, scratch tickets and so on. 3) Advertise.

Now compare that to racing. They get billions in slot revenue. What have they spent money on to grow the game?

The more money you give back to them, the less they spend to grow. They put all the money in one spot and one spot only - their own pocketbooks.

The above would be an unmitigated disaster. if you think money is not spent on rebates, marketing and such now, you don't want to see what tomorrow brings with a plan like this.

your examples are a little faulty. Walmart isn't the success it is because of 900% margin, wal-marts profit margin is 3.39%. When it comes to authors and singer song-writers the publishers are taking huge gambles and 9 out of 10 bands/books don't make it.

Would Mr. Pope's plan not work as he outlines it? If more money goes to purses and owners, would that not induce bigger purses and bigger fields?

Forget the corruption for a minute and the dysfunctional management. If the flow were reversed and most of the money went to the owners, would that not change the system?

Yep, bigger purses without a massive increase in racedays results in bigger fields.

This happened in two places in a measurable way so far: Ontario and Pennsylvania.

Ontario - big fields; $2B in slots cash. Purses almost quadrupled. Wagering is off around 35%. Tracks are closing.

Right now there has been little correlation to increasing purses and handles. The game has too many other issues. If we hired an efficiency expert he would tell us that placing $100m more in a purse will not grow our game, yet that is all we seem to do.

We made a grave error when we began not being a monopoly anymore, and when slots came in. Everyone got rich - vets, feed men, drivers, jockeys, some trainers. But the people who pay the bills just ended up getting poorer.

Winston, his plan is being used at Woodbine already. And they have slots as well or purses would be 60% of what they are now.
How is growth going at Woodbine? Sure, you have big purses and big fields, but on a Wednesday night they don't even do the handle that Mountaineer does on a Monday or Tuesday night.
Until racing gives substantial rebates across the board or drops takeouts significantly, other forms of gambling will outperform horse racing and leave it in the dust.
Over the last 15 years in Canada gambling has boomed....all gambling that is except horse racing.

It is astounding, for sure.

Do something, find out it does not work, then do more of it.

OK. I guess what I don't understand then is how cutting out the ADW fee will negatively affect the handle.
If the cost to the middleman is reduced doesn't that just benefit the product on either end? I mean, would the ADW's stop taking bets if heir cut were lower?

I left out one thing. According to Pope's plan, Woodbine would have to pay 15% for signal fees for all other tracks.
Their purses would plummet under Pope's plan.
There would be no incentive to put anything but Woodbine and Mohawk on their menu.

M, the price sensitive players who bet at rebate shops would leave or bet a lot less.
Handle will drop.
ADW's like Youbet would go out of business.
Customers leaving would mean that the bottom line would decrease over a very short period of time.

They are the only ones giving back, promoting the sport, and rebating.

Do you buy ATM or the horseplayer magazine? Look at the ads for racing - they are all ADW ads. How many do you see from Belmont advertising?

Look at Twinspires TV - rumour is it cost $8M. Do you really think a horseman's group would spend money on that?

Rebating - each dollar given back to a player yields $7-$12 more in handle. Cut rebates (the ADW's are the only ones rebating) lower handle.

I read a post and checked it with someone - it is recopied here:

"Question: Where in your plan is bizdev, rebating and marketing spend mandated?

For example, according to Youbet’s last annual report, over 30% of their revenue was spent on those two items (and they are not even a rebater).

If racing gets all that money, say $3.0 billion per year, do you really think that they will put 30%, or $900M into marketing the sport and biz dev.

From its history, of infighting and lack of vision, I would submit they would not spend $900M on those things, they would fight over it, and probably split it 50/50 for themselves."

Good luck raising handles if a horseman group and a track take all the cash for themselves.

We'll be betting by carrier pigeon.

Sorry, real life got in the way there. Thanks for explaining that, both of you.

So, PtP, you are now the Commissioner of Horse Racing. How do you fix it?

I pity the person who tries. Honestly.

It's pretty messed up.