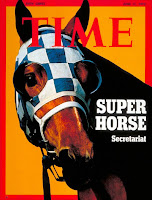 The press has been having a tough go of it of late. Many say they have lost the confidence of the readers, and they have been passed by technology. Yesterday, at a meeting to name Athlete of the Year in Canada "it was announced by the Lou Marsh Committee that only humans be eligible for the award."

Somebeachsomewhere brought tens of thousands of fans out to the racetrack. He brought fans from the US out to watch him train, like he did on a morning in Lexington, invoking memories of a long ago time when people met Dan Patch when he walked off a train. He brought an entire part of our nation to its feet, like he did in Nova Scotia. But more importantly, sports is about excellence. It is about someone, or some thing rising up to be the King or Queen of his or her craft. This horse did just that. This horse ripped other horse's hearts out. Just like Tiger Woods in the last group of a US Open, or Michael Jordan at the top of the key, or Wayne Gretzky behind the net, we know that whomever is defending or competing against them is toast. Just like Sham was toast, so were the horses that raced against this horse; the race was over before it even started.

That is excellence. That is sport. And we make a big mistake when we eliminate athletes like that - two footed, one footed or four footed - from even being considered.

For a look at the National News piece about the Award (before they changed the rule) give this a go:

at December 10, 2008
Email ThisBlogThis!Share to TwitterShare to FacebookShare to Pinterest

Ok, lets not get carried away with this "horese" of the year stuff. After all its harness racing, a sport, (so called) that is well below the radar of 99% of the population. A sport, (so called) consisting of pharmacists (non-graduates, by the way) who would be hard pressed to get gainful employment anywhere outside the track. Too bad slot-bloated purses currently exist. If they did not exist, most of the rabble, (er sorry, I mean horsemen) would have disappeared due to bankruptcy.

Worth a look. Native Dancer on Time's May 31st, 1954 cover. A great article also. How great racing was once upon a time.
RG

It was foolish to change the rule. If people thought it shouldn't be a horse, they could vote for a human.

Curious to know if SBSW was a T-bred, would they have felt the same way.